Oh my goodness, these past few days have been the roughest but also most exciting days. I arrived on Monday morning at 8:00am, and yesterday I had my first introduction day for the International Student Network (ISN) program. This program will continue until friday; I’ll then have a week to get even more settled in, then classes will start.

Sunday-Monday: Leaving was harder than I anticipated (shout out to Zack and my family, also to Pixie) but the flight was surprisingly quick. I was very excited flying in and seeing some sheep from the air, but the nerves really hit me at the airport (and especially once I saw it was already raining, and hard). I only got lost trying to find my luggage once, and eventually found the UvA desk where we could be taken to our housing office for free and directly– I definitely couldn’t have handled the metro at this time! I paid my first month’s rent at the housing office (so weird doing that for the first time, and completely on my own, in a difference language), and got the keys to my apartment. Walking into my apartment was the most terrifying moment I’ve experienced in a while. I was tired and hungry; I opened the door to an incredibly bland, empty, muggy apartment. The internet could only be accessed by a cable in the common room, but that wouldn’t matter anyway as my family and friends were still asleep in America. The bedding provided for us consists of an airplane-quality pillow, and a stiff comforter and cover. I had no towel, so a shower wasn’t an option. I attempted to get some sleep. 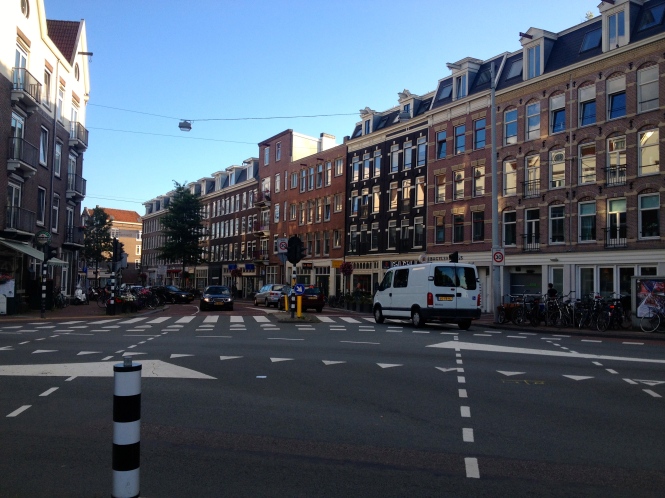 Spanndammerstraat, where our grocery store is

Roommate: But alas, an hour into my nightmare living situation, my roommate Leah showed up. She’s an American (yay!) from Salt Lake City. Luckily we were both scared shitless and so tired, so we spent the day sleeping and slowing walking to the grocery store (Albert Hein, see photo!) to buy ham and Gouda that we weren’t even hungry for. Our building felt so empty and we hadn’t run into other exchange students, at least that we knew of. This housing is a mixture of regular UvA students and international students, but it felt so empty coming in.

My Dutch Angel: ISN offers a buddy program that I decided to take advantage of. I was paired with Lisa, a Dutch UvA communications student. We had been talking before I arrived, and she offered to come to my apartment that first night and just talk and make me feel better. She really is an angel. Lisa brought me a towel (score!) and helped Leah and I figure out where exactly we needed to go on our first introduction day. After meeting with Lisa, I slept well through the night.

ISN Day 1: Leah and I met some fellow exchange students at the skatepark behind our building (yes, it is somewhat scary) and we all decided to travel to the ISN registration together. A small group of us (two English kids, Leah and me, and a guy from Norway) decided to walk, which took about an hour. We didn’t exactly have a map and guessed the way; I hadn’t even been to the city center yet, so all of my trust was in their hands. Luckily we made it to registration. I had to sweet-talk a security guard into getting me some water as I felt I was going to faint (I was wearing jeans and a sweater and boots in August, in the sun,  and it was warmer than I expected!) I felt so stupid but I was still jet lagged, not used to walking, dehydrated, and overall scared; I made it work. We were split into orientation groups, and luckily one of the British kids, Natalie, was in my group. We met everyone, exchanged numbers, walked to lunch through the city center and Dam Square, went to an orientation talk, and ate dinner together. I even saw some prostitutes, during the day ;).

Sidenote: I discovered shortly after getting to Amsterdam that my cellphone 1) doesn’t like to connect me to free public wifi and 2) has an international SIM card which is the most obnoxious thing in the world. I thought I was being smart, but having a local Dutch SIM card will be much easier to deal with. I am trying to get my public wifi fixed today, so as all other students could contact family and friends in our downtime in the city, I felt lost. This was a sobering moment as I realized just how connected to my phone I am. But talking to family at this time is incredibly important, so fixing it is essential.

After dinner, my British friends (Natalie and Callum), Leah, and I trekked back to our building to refresh before the night activity. We spent some time in Callum’s room listening to music, meeting new people, drinking Polish Bison Grass Vodka, and eventually hiking to the ISN party. We were all expecting a somewhat lame gathering, but no, Amsterdam really knows how to party. This was a full-scale club with 800 international students dancing like crazy (and taking advantage of the lowered drinking age). We were supposed to dress to represent our countries, but no one brought anything. I found a few people with American items and connected with them.

Odeon, where our first party was as ISN students

Today will be another crazy busy day, but things are looking up. Once I fix my phone, I will start my day of a dutch language course and a canal cruise. Thanks for hanging through this incredibly long post, but I felt the need to let everyone know that I’m alright, surviving, and taking in the city. You’ll hear from me later this week!

Spent this guy’s birthday in one of our favorite places, bouldering and enjoying the desert. S/O to our favorites @joshuatreenps and @lacopinekitchen 🌵