Sixth day and I’m already feeling a little local. Biking is my new favorite hobby, but that might get old pretty soon. The last activity of my introduction week was last night, and it was the biggest party for international students of the semester. What an incredible week it has been.

Wednesday was the second day of introduction activities. Before arriving at Uva (known as “Oofa” around here) I visited Central Station for my stipend card and the phone store for a SIM card. Rokin (which leads from Central Station to Dam Square) is so touristy. Dam square is beautiful though, even with all the too-friendly fat pigeons. After a Dutch brunch of hard bread and Gouda with my introduction group, we had our “Dutch Crash Course” and learned some basic Dutch phrases. I’m trying, and I’ll get better once my actually intensive Dutch courses start, but right not it all sounds like the language that the Sims speak. My favorite thing about the language thusfar is that waffles are pronounced “vah-fels” and shops are said as “vinkels.” How adorable.

Dam Square, unsure of which exact buildings those are 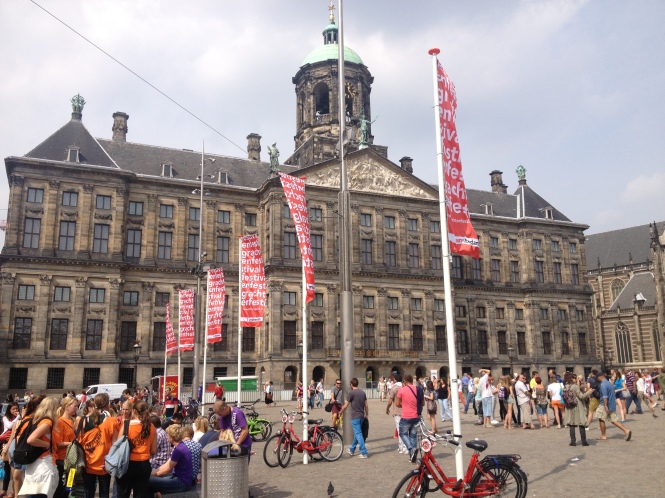 We saw the city by taking a canal cruise that afternoon, which is where most of my pictures came from. The canals and houses along the canals are truly incredible. I learned that they cost millions, and sometimes a family will buy two and combine them. Note: families are such a big thing here. Yesterday we went to the zoo, and I saw the most adorable families and children that I’ve ever seen. Don’t even get me started on what happens when I see the babies on their parents’ bikes. The houseboats were really neat too, some of which had cribs right next to the easily-opened doors.

I experienced my first pub crawl on Wednesday night. We went to four different bars, and then met at the club which hosts international student nights every Wednesday. What wasn’t so fun was the shot my introduction group leader bought for all of us in celebration; which consisted of Everclear with tobasco sauce. I don’t even think that’s a Dutch thing! I love talking about what drinking culture is like in everyone’s home country, as we are all well into college and have difference experiences. Americans are known for their pong and cup games, whereas Europeans like chants or speaking group games (of course those are popular in the States too). That was the first time I saw the Red Light District at night, which was basically what I imagined it to be, aside from the fact that the women will open up their little windows to talk to you. We still don’t know exactly who uses them, whether they be tourists or locals. After quite a long night I enjoyed a toastie with my English friends; they aren’t Dutch, but we did use Gouda.

Thursday was quite cloudy, but in general still a fun adventure. We bused to the zoo, which is in the middle of the city. We walked through a pretty cute neighborhood to get there, and you could hear piano being played through an open window. It was absolutely perfect. The zoo also had strange animals that I hadn’t seen before, like the beaver rat. One was a ginger and we (my group) named it Lily. 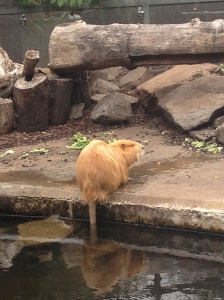 Me, the Beaver Rat

While walking to a bar for an afternoon beer, a few of us ventured off to find bikes. Waterloo Market is a fleamarket of sorts that sells clothing and a few bikes; we are pretty sure they had been stolen but I think that’s the norm. I ended up getting a great quality second-hand bike (one that looks like every other bike in Amsterdam, as you’re supposed to do) for 100 euros; the lock and two lights (necessities) were included. I aboslutely love riding around the city, and I’ll get to that later. Thursday night was our chance to see a comedy performance at Boom Comedy. They are an American comedy troop who definitely likes to make fun of Americans. They also made fun of Dutch things, such as product names that are absurd. Too many to list, and also too inappropriate.

Friday consisted of chores, but they were necessary! I had my “Getting Started” appointment at the University, and there I interacted with the most beautiful Dutch male being I have witnessed thusfar. Since he checked me in and therefore knows my name, I really hope he never sees this. All of the international students have decided that you must be attractive to be a resident of the Netherlands. These beauties work in coffeeshops (the actual cafes, not the “coffeeshops”), so you can catch them everywhere. I biked to my meeting, which was terrifying. You have moments were you say to yourself “if I don’t ride up onto this curb and try not to fall over or stop my bike by breaking with my exposed toe on the pavement, I will no doubt get hit by a car or bus,” and then you do what you have to do. The most exciting moment was having to ride between a truck parked in the bike lane and a moving tram, inches from being smashed. But that’s why Amsterdam is so fun!! After my meeting I sat down for a cappuccino at a cafe, so local. I alternated between watching Dutch people drink beers at 10:30am and listening to an American couple, who were trying to explain to the waitress how she wanted her eggs scrambled, and how in America, you can choose between bacon or sausage with breakfast. Yikes. Friday was also my first day to ride the train and the metro as Leah and I ventured off to Ikea. It was quite the journey, but when you live in a brand new city without much money or towels, per say, you don’t have a choice and suck it up. It was actually easy, but really only because I have internet on my phone now, the transportation company’s app, and the guts to ask around when I need help.

My bike, she doesn’t have a name yet

The final party was incredibly crazy but so much fun. This was the first time I saw Leidseplein, one of the two squares known for their bars and clubs. Melkweg, which used to be a dairy factory I believe, was so huge. It was one of those nights where I just needed to leave the party and sit by a canal to get some air, and that’s what I did. What else are you supposed to do when a party is actually scheduled to go until 5am?

My university’s student center, how pretty!

Jasmin (San Fran), Pål (Norway), and Me at Melkweg!